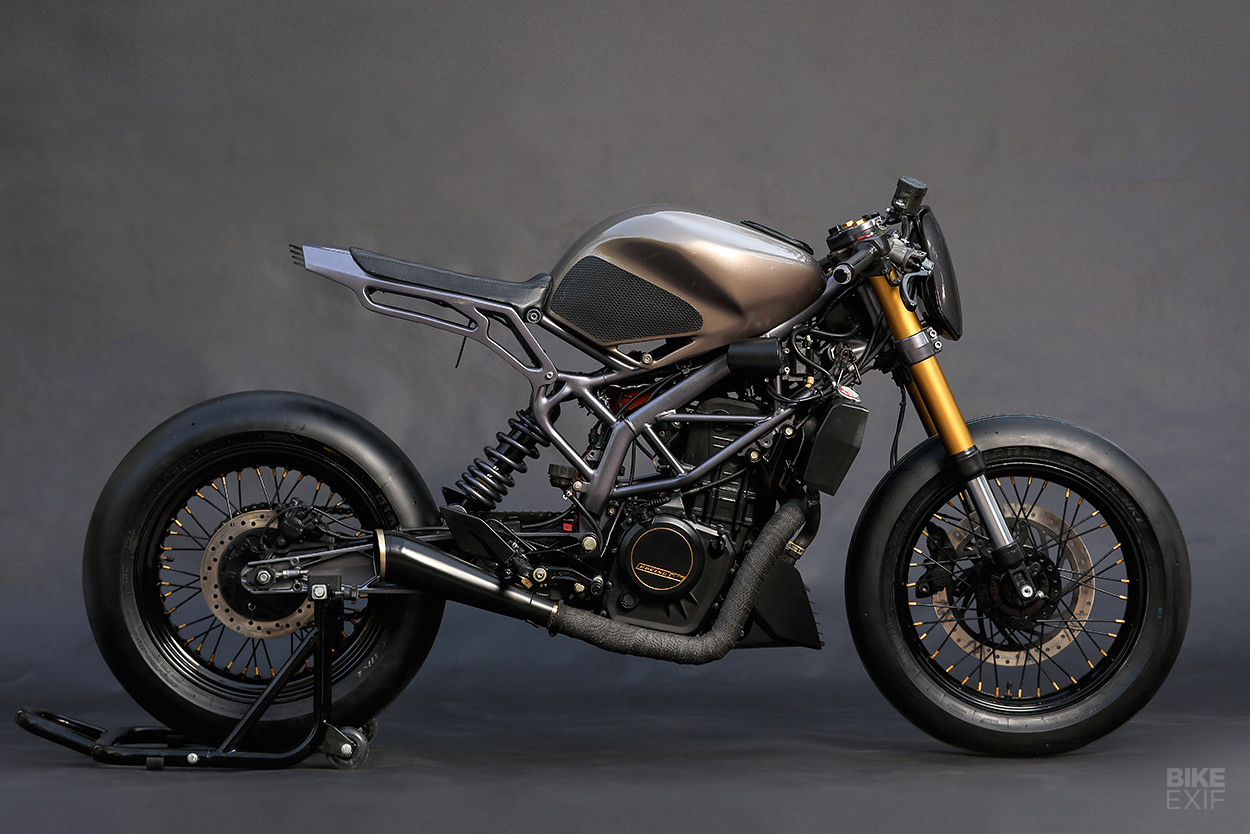 KTM is growing incredibly fast in India. Last year, the Austrian marque sold 64,000 bikes—up more than 25% on the previous year. It’s enough to give pause to top-selling incumbents Hero and Bajaj, and the trend has been noticed by top custom shop Rajputana. 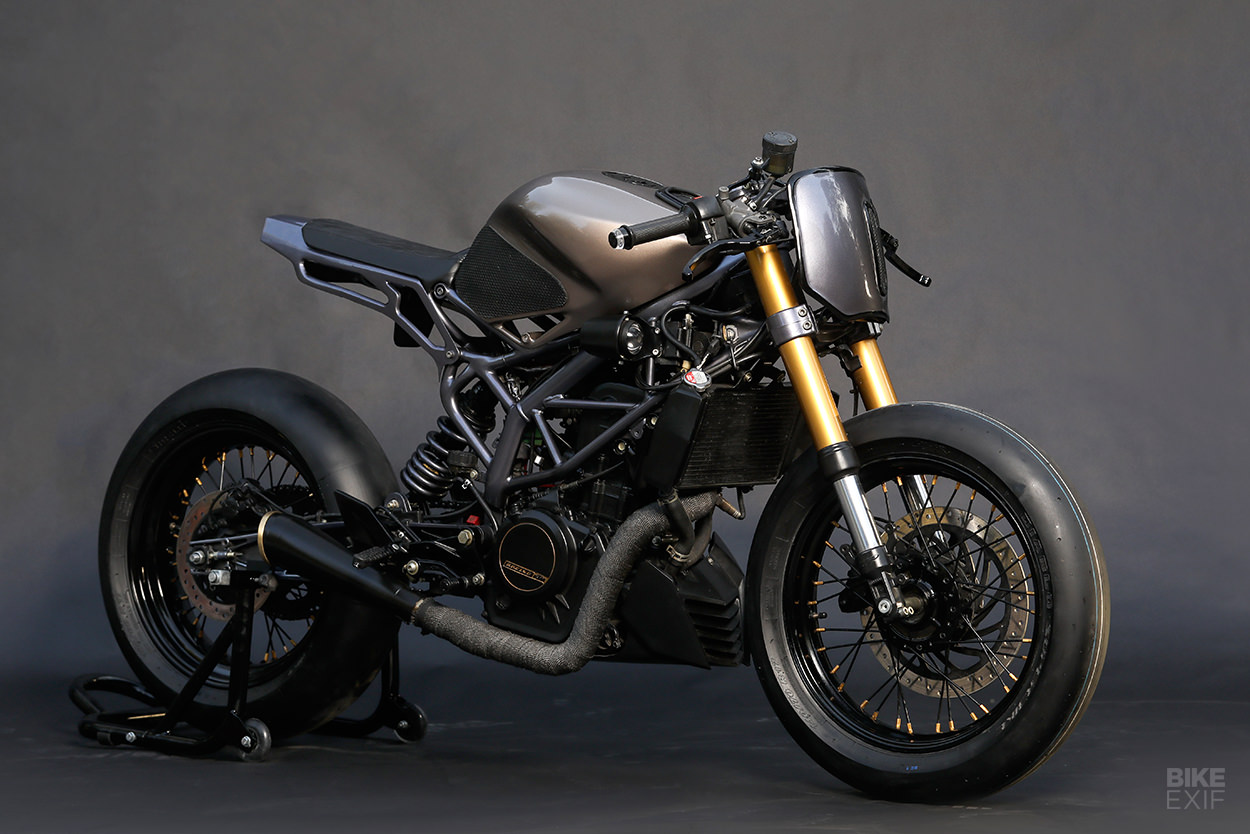 Rajputana have a rock-solid reputation in the subcontinent; when Harley-Davidson launched the Street, for example, they tapped the Jaipur-based shop for the first officially sanctioned custom Street build.

This KTM was a private client commission, though. The 390 Duke is a popular model, along with the 200, since the Indian market favors smaller capacity bikes. And the 43 hp single-cylinder engine—also used in Husqvarna’s 401s—is one of the best in the business. 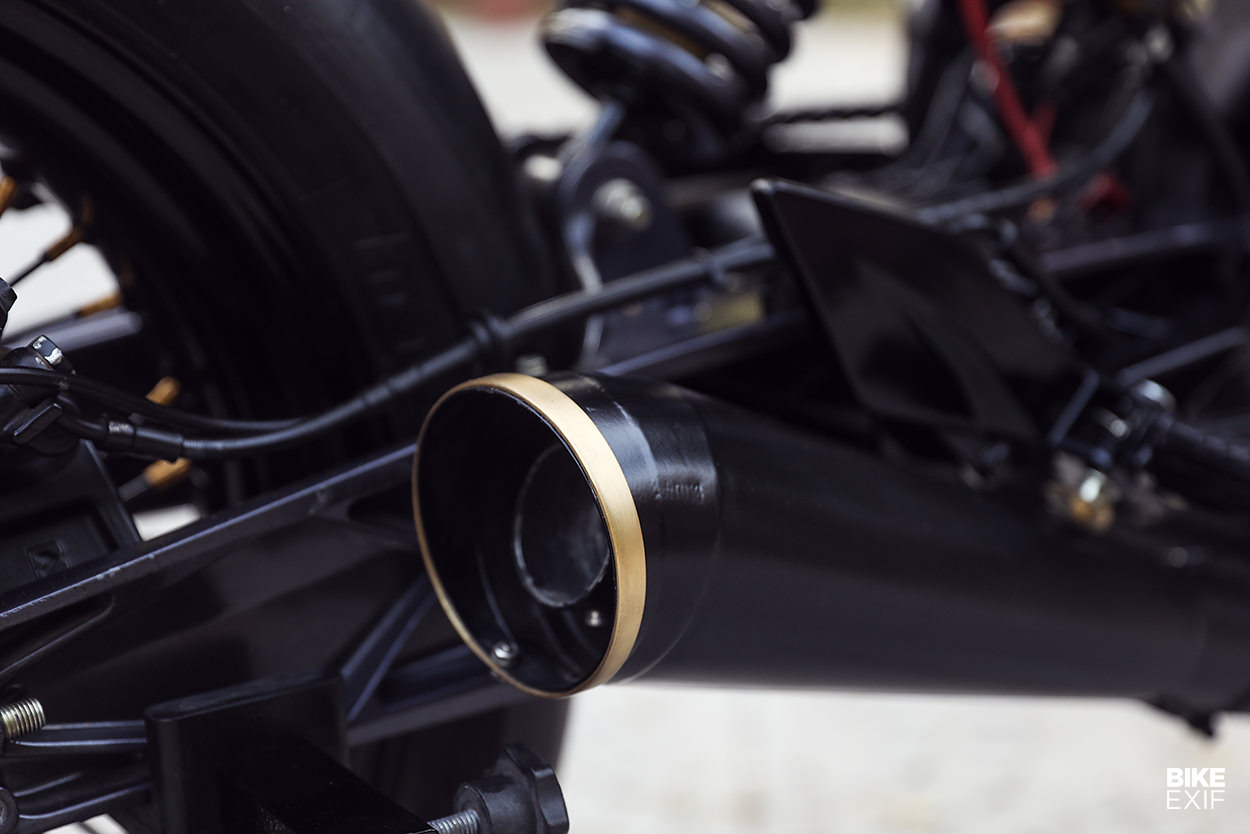 The usual brief with custom KTMs, no matter where the builder is based, is to make it look less like a KTM. The dynamic qualities of the bikes are well liked, but some retro-inclined folks find the distinctive styling too hard-edged or in-your face. And that was the case here.

The Rajputana crew has left the engine and suspension alone, since KTM dialed in those elements brilliantly at the factory. There’s a straight-through exhaust system to free up the breathing, but the main effort has been focused on the bodywork: there’s a new tank, tail unit and mini fairing hand-crafted from 20-gauge low carbon steel. 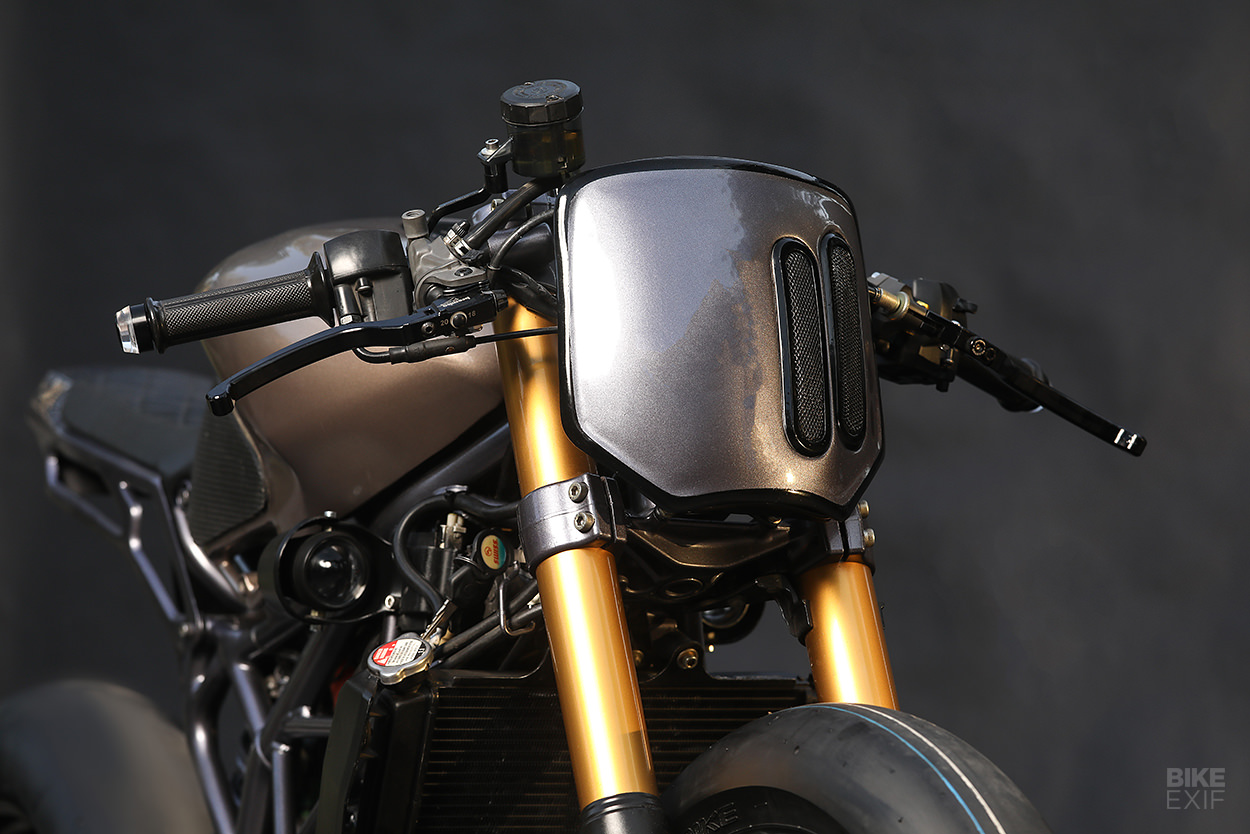 “The tank was built from scratch,” says Vijay. “It was inspired by the iconic 2007 Yamaha YZF-R1, before the crossplane cranks were released.” On both sides, attached to the tank, are the projector headlights from a BMW GS, and the KTM speedo has been relocated to the top of the tank, to clean up the bar area. Snake Skins tank pads help the rider’s knees to grip.

There’s a new rear frame too, with a design that looks like it could have come straight from KTM’s design studio Kiska. 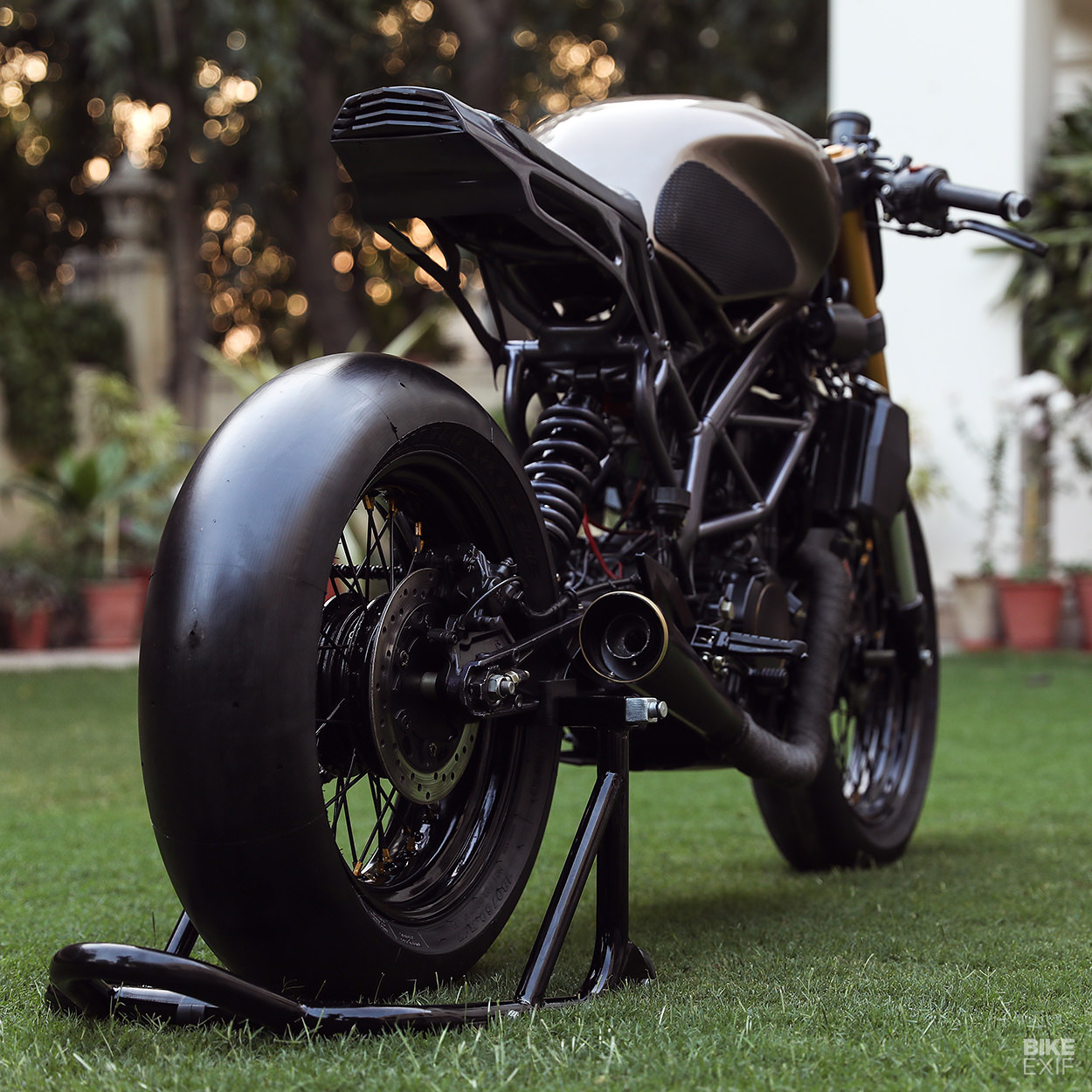 “The design started as a wireframe model using welding wires, and when the design and proportions were finalised, we made the new subframe using mild steel pipe,” says Vijay. “We didn’t use the stock mounting points—instead, we used a CNC machine to make new ones.”

The LED lighting on the tail is embedded in neatly sliced acrylic, and the overall result is slick and professional. 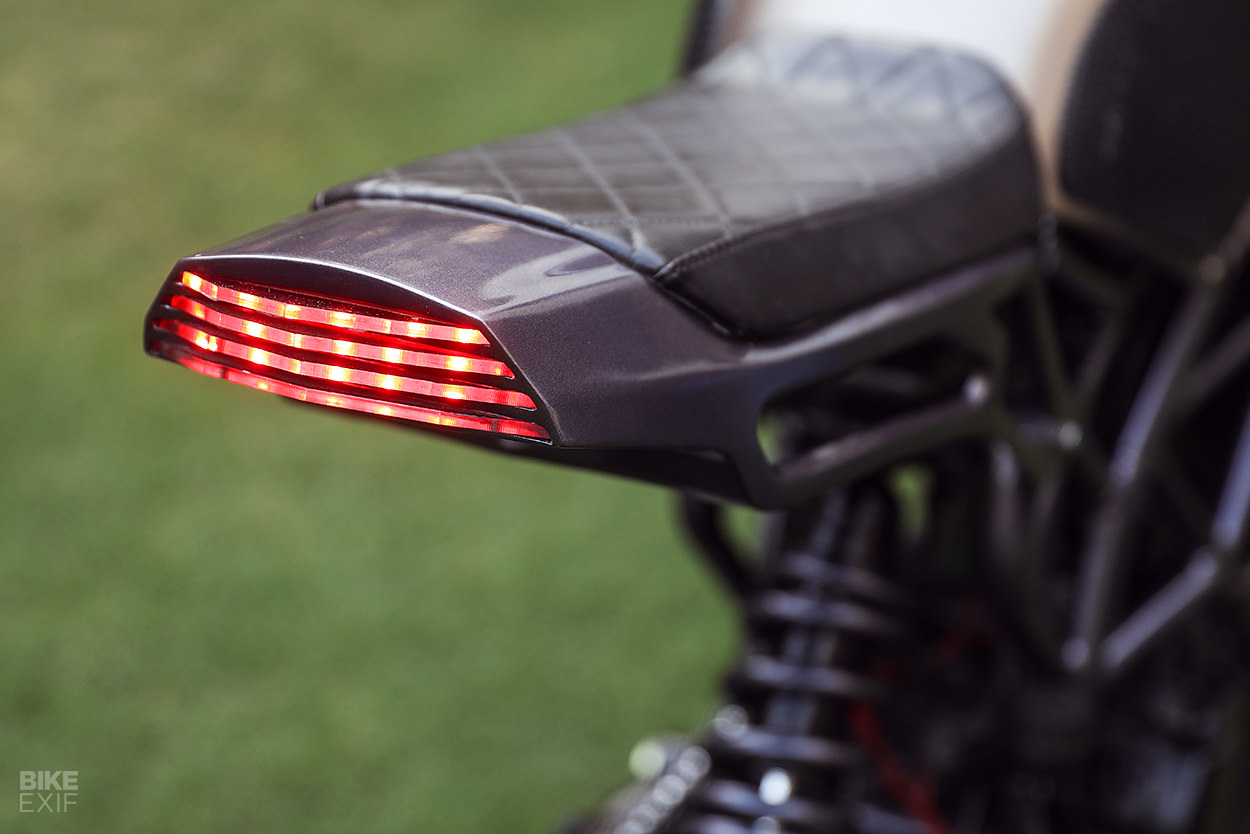 The metallic paint is low-key and subtle, with hints of gold elsewhere on hard parts. It reflects the sophisticated visual ethos of Jaipur, the capital of Rajasthan: “We just wanted to get away from the usual black or greyscale.”

They wanted to get away from the 17-inch alloy wheels too. “The rims are off a Bonneville we rebuilt in the past—they were just laying around in storage. You never see a 390 Duke with spokes, and they instantly add so much more character to the motorcycle.” 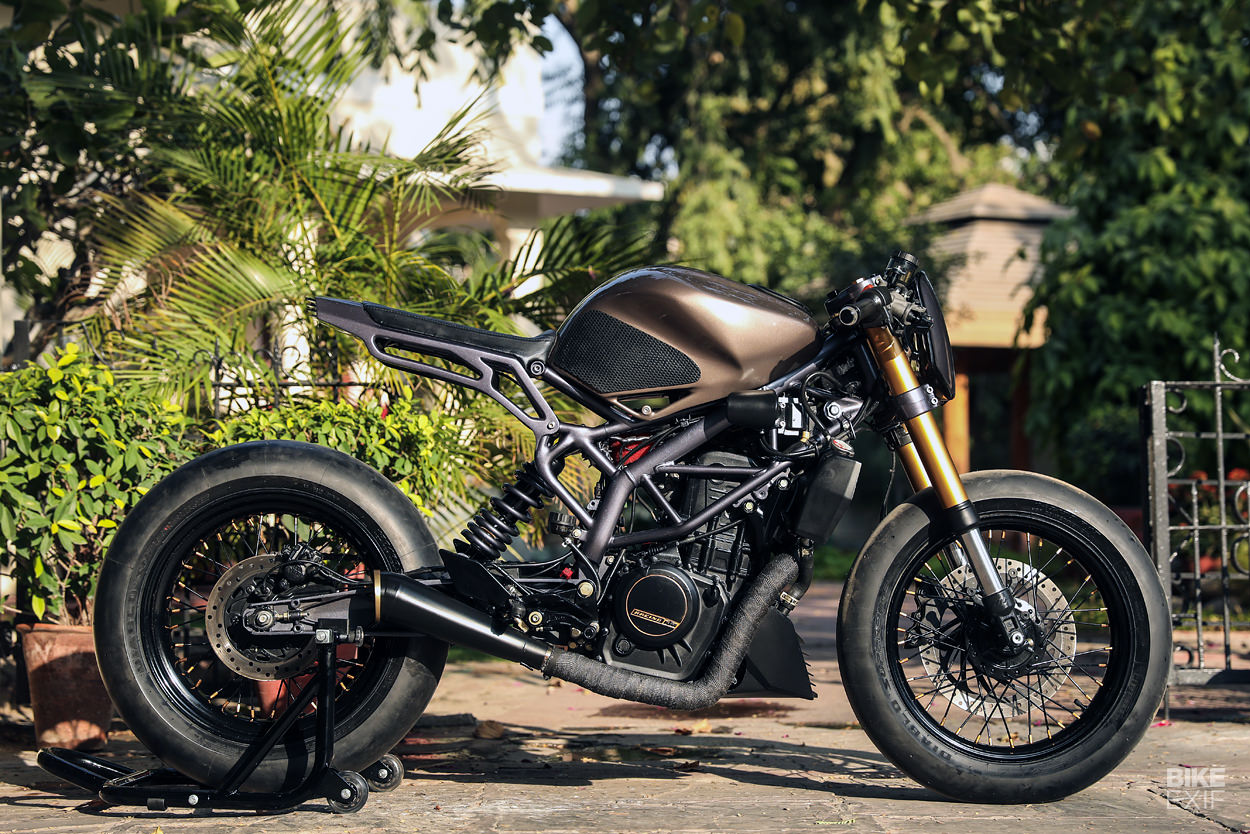 To get the Triumph wheels to fit, Rajputana turned out a set of custom hubs on their trusty lathe, using billet aluminum. (“You simply count the holes in the rim and drill the hubs—easy sauce!”)

The tires are Pirelli Diablo Supercorsa SC slicks, 140 section at the front and 190 at the back, which get up to temperature fast in the hot climate. “We strongly believe that racing slicks make everything just better to look at.” 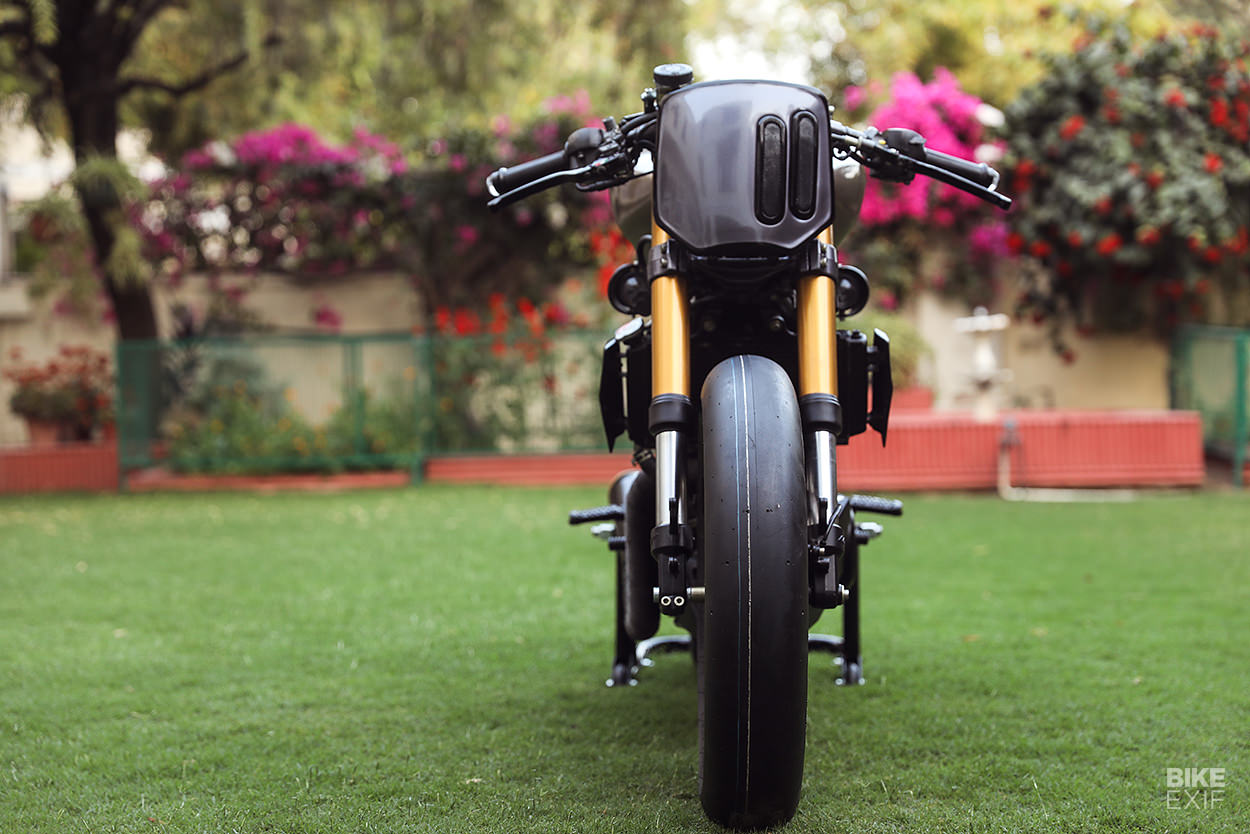 The excellent stock brake rotors and calipers remain, but Rajputana have added their own clip-ons, and upgraded the master cylinder to a Brembo radial unit. “The brake feel is simply amazing now.”

Rajputana have delivered one of those tricky ‘best of both worlds’ bikes: a complete restyle that doesn’t compromise the dynamic qualities of the original. We’re not averse to the angular styling of KTM factory bikes, but we have to admit: this is one of the tastiest KTMs we’ve seen. 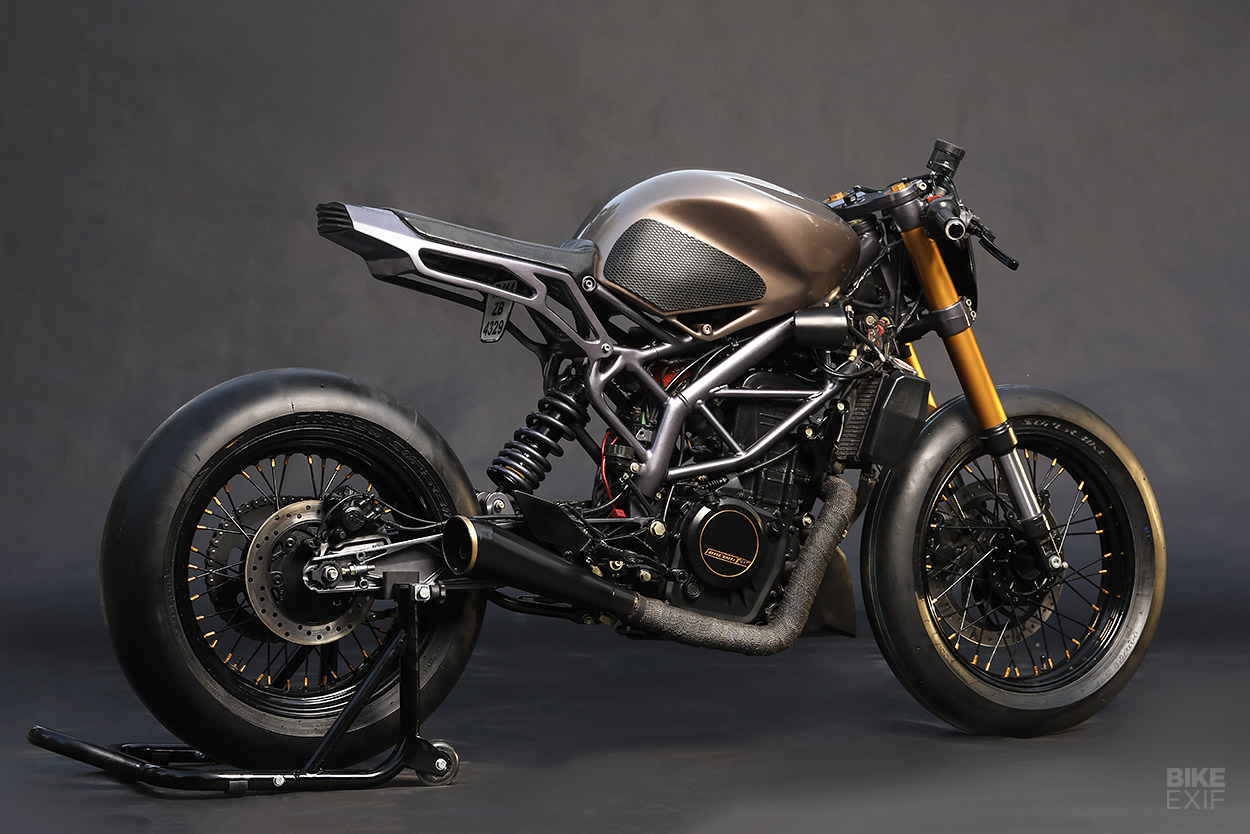